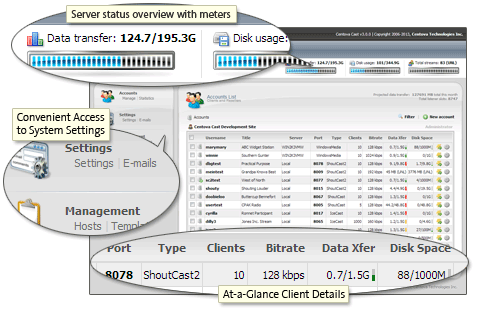 Through the Centova Cast web-based administration panel, administrators receive a consolidated overview of all client accounts (optionally across multiple servers) from a single, convenient interface.

Information is available at-a-glance about overall server resource usage and individual clients' resource consumption. Each client's complete account details and configuration is never more than a click away. 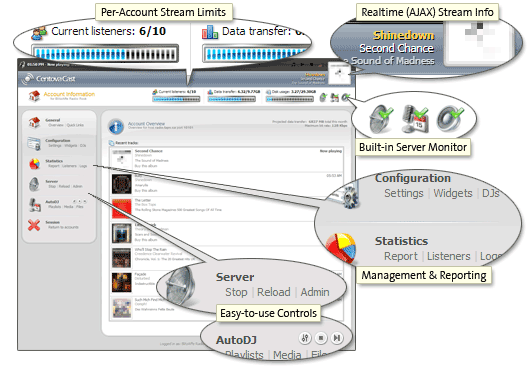 Centova Cast reduces support calls by providing an easy-to-use web-based control panel to each client, allowing the client to manage his or her own streaming server account on demand.

The client can stop and start his server, edit his settings, review resource usage and statistics, browse stream logs, and obtain access to a variety of information about his stream.

Centova Cast takes the hassle out of account limit enforcement. Each Centova Cast streaming server account can be restricted in a number of ways: 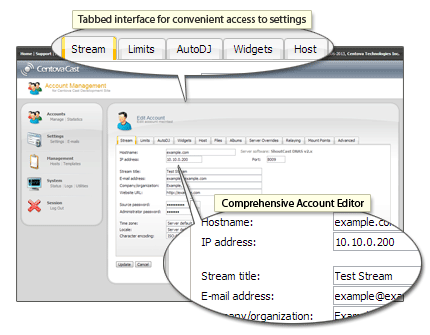 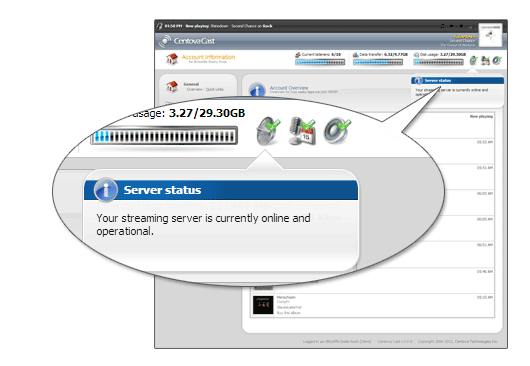 Centova Cast includes a built-in monitoring system to minimize downtime in streaming server accounts. Should a SHOUTcast® or IceCast server crash or unexpectedly go offline for any reason, Centova Cast will automatically restart the server within a matter of seconds, and can notify the administrator and client of the outage. 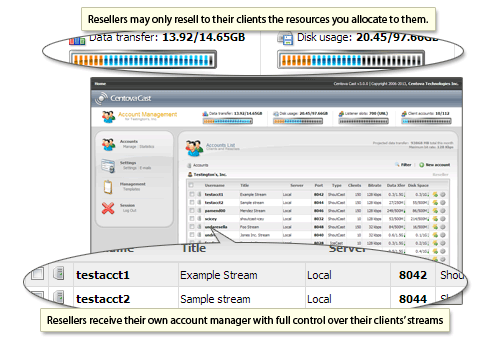 The administrator can set resource limits for each reseller account just like he would for client accounts. Each reseller receives his own, personal administrative interface to create, manage, and remove his clients' accounts, similar to the Centova Cast master administrator account.

Centova Cast has built-in support for SHOUTcast® v2, SHOUTcast® v1, and IceCast streaming servers. Just choose the preferred server type when creating a client account, and Centova Cast will provision the software accordingly and transparently apply all configuration settings in the appropriate format.

Centova Cast includes support for integration with WHMCS and iHost/iPanel billing systems, and several other billing systems include their own support for Centova Cast. Using any of these popular products, you can completely automate the technical portion of your business operations through the following automated processes:

Centova Cast's interface was designed using XHTML+CSS, and all HTML is stored un-encoded in easy-to-modify templates. This makes retheming and rebranding Centova Cast to match your corporate identity a simple task.

Centova Cast also includes full internationalization support, which dramatically reduces the complexity of translating the Centova Cast interface into other languages. Translation is as simple as editing a single file and entering the foreign-language equivalents for a list of English phrases.

Integration with your favorite billing or provisioning system is a simple task using Centova Cast's built-in, fully-documented XML/HTTP API. The API allows for automation of provisioning jobs, account configuration, server startup/shutdown, and virtually any other task supported by Centova Cast. (Note that integration will require some programming knowledge and a basic understanding of XML.)

A PHP implementation of the XML API is also available as part of the Centova Cast SDK.

Take a look at the broadcaster tour to see the features and capabilities that Centova Cast can provide to your stream hosting clients.

Centova Cast is offered as a downloadable product which you install and maintain on your own servers.